Literally hundreds of these small ships where built during WWII by many small ship yards, who before the war specialised in building yachts, plus many where built by the shipyards in the countries occupied by the Germans, and even Sweden joined the building programme, building numerous “KFK’s”  for the German navy. The design of the ship was finally chosen from numerous mock-ups and models, and featured a double ended configuration similar to the British “MFV’s”of the period and although a Transom stern was added late in the war little was changed throughout the total building programme.

The ships served in every theatre where the German navy was involved, and where fitted for either “Minesweeping”, which included fitting a diesel generator forward of the bridge to provide power for the Magnetic sweep, Patrol Boat version (Vorpostenboot) where the armament was generally a 2 cm gun fore and aft, or the “UJ” (Submarine hunter)which carried a heavier gun forward, either a single shot3.7cm or a 40 mm Bofors gun, with a single or twin 2 cm aft, plus six depth charges in single racks on the stern. However having singled out these three different categories, it would appear that no two ships where the same, presumably each being fitted with what was available at the time, or each being fitted out to execute the particular task that the ship was assigned.

Our model is based on a vessel serving in “Norwegian” waters during 1944 and is fitted out to represent a “UJ” version.

The glass fibre hull is produced in white, and has the heavy half round rubbing strake at deck level , moulded onto the hull. 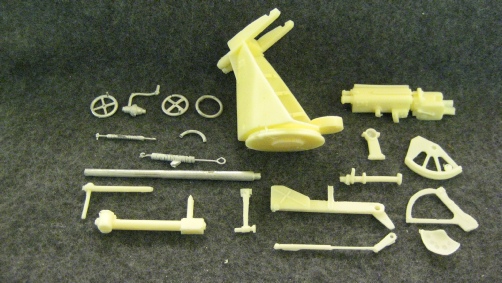